tl;dr Don’t put any code in your foo_label_new() function other than g_object_new(), and watch out with Vala.

From this GJS bug report I realized there’s a trap that GObject library writers can fall into,

Avoid code at your construction site.

that I don’t think is documented anywhere. So I’m writing a blog post about it. I hope readers from Planet GNOME can help figure out where it needs to be documented.

For an object (let’s call it FooLabel) that’s part of the public API of a library (let’s call it libfoo), creating the object via its foo_label_new() constructor function should be equivalent to creating it via g_object_new().

If foo_label_new() takes no arguments then it should literally be only this:

If it does take arguments, then they should correspond to construct properties, and they should get set in the g_object_new() call. (It’s customary to at least put all construct-only properties as arguments to the constructor function.) For example:

Do not put any other code in foo_label_new(). That is, don’t do this:

The reason for that is because callers of your library will expect to be able to create FooLabels using g_object_new() in many situations. This is done when creating a FooLabel in JS and Python, but also when creating one from a Glade file, and also in plain old C when you need to set construct properties. In all those situations, the private field some_variable will not get initialized to 5!

Instead, put the code in foo_label_init(). That way, it will be executed regardless of how the object is constructed. And if you need to write code in the constructor that depends on construct properties that have been set, use the constructed virtual function. There’s a code example here.

If you want more details about what function is called when, Allison Lortie has a really useful blog post.

This trap can be easy to fall into in Vala. Using a construct block is the right way to do it:

This is the wrong way to do it:

This is tricky because the wrong way seems like the most obvious way to me!

This has been a public service announcement for the GNOME community, but here’s where you come in! Please help figure out where this should be documented, and whether it’s possible to enforce it through automated tools.

For example, the Writing Bindable APIs page seems like a good place to warn about it, and I’ve already added it there. But this should probably go into Vala documentation in the appropriate place. I have no idea if this is a problem with Rust’s gobject_gen! macro, but if it is then it should be documented as well.

We have once again a set of accurate, up-to-date documentation for GJS. Find it at devdocs.baznga.org!

Many thanks are due to Everaldo Canuto, Patrick Griffis, and Dustin Falgout for helping get the website back online, and to Nuveo for sponsoring the hosting.

In addition, thanks to Patrick’s lead, we have a docker image if you want to run the documentation site yourself.

If you find any inaccuracies in the documentation, please report a bug at this issue tracker.

In the last days of January I attended the GNOME Developer Experience hackfest, remotely. This was a first for me since I have not attended a hackfest remotely before. It was also a first for the hackfest, that three remote participants signed up, and we had a discussion on desktop-devel-list as to how that should work.

My main project for the three days was to show people the documentation browser I’ve been working on. This got started a while after last year’s edition of the DX hackfest, which I didn’t attend, but the project was born out of a discussion with some people who were there and talked about it last year.

Some background: You can write applications for the GNOME desktop in many different programming languages, including C, Python, Javascript, and Vala; this is made possible through a piece of software called GObject Introspection, which is a bridge between C libraries and many other programming languages. At (yet another) DX hackfest, the one in 2013, GNOME decided to promote Javascript (and the GJS interpreter, which is basically the Javascript engine from Firefox 24 with GObject Introspection on top) as its preferred platform for application development. Not the exclusive platform, you can still develop apps in Python if you want, but there would be a focus on getting new developers started in Javascript, with tutorials and documentation.

Sadly, since then, we haven’t had good API documentation for developing apps in GJS. The best story we had for a long time was to tell people to refer to the C, Python, or Vala API references and mentally make the transition to Javascript, a process I’ve compared to playing a song on the guitar using chord sheets from the internet, but mentally transposing them to a different key as you go along. At one point, Giovanni Campagna generated some static Javascript documentation and hosted it on his website. This eventually got out of date.

So, this was the problem I was hoping to solve. After a short-lived attempt to write my own web app using Semantic UI (a technology I’d still like to check out someday!) I figured, why bother when there was something that would fit the bill perfectly well: DevDocs, an open-source documentation browser that combines all kinds of documentation from elsewhere (mostly web development technologies) and presents them in a unified fashion with a useful but simple and elegant web app. 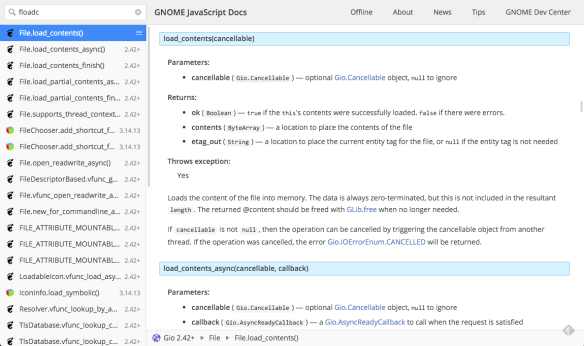 Here it is in action

At the hackfest I gave a demo (at 6:30 AM, because of the timezone difference!) to the other people there who were working on developer documentation. I got some good feedback from the people who were listening, discussed some of the shortcomings, and we discussed Mathieu Duponchelle’s new documentation tool, Hotdoc, as well. One good outcome was that the GNOME Developer Center now links to my instance of DevDocs (noting that it’s “experimental”.)

To talk about one of the limitations that we discussed at the hackfest: The approach I chose generates all the documentation from one file, the “GIR file,” which is the same approach that g-ir-doc-tool has always taken. This is nice because it’s self-contained, but also incomplete: API references often include separate pages not connected to any API in particular, such as this one. I think using Hotdoc will help overcome this limitation, since Hotdoc is made for combining these sorts of things. I’m also happy not to work with g-ir-doc-tool since all the stuff I added to it was basically bolted on the side, not really useful for anything else, and therefore not likely to be accepted upstream.

I’m now hosting an instance of the GNOME Javascript API documentation on my modified version of DevDocs: try it out at http://docs.ptomato.name:9292/.

During the hackfest I also collaborated with Philip Withnall on some autoconf macros for GJS and GObject Introspection, which I’ll talk about in a following post…

Some of the other stuff that people worked on is summarized on Philip W.’s blog.

This work is licensed under a Creative Commons Attribution-ShareAlike 4.0 International License.