Perhaps not the most wisely chosen title for this Scientific American newsbite, but very cool research: “Ultra High Speed Camera Records at Speed of Light”

They have built a high-speed camera with a high-enough frame rate that they were able to watch a pulse of laser light traveling through a Coke bottle in slow motion. (Pause for a moment to watch this video, for it’s really impressive. I’ve linked to the juicy part.)

You should never read Youtube comments, but on this video, people are actually asking good questions, albeit with the usual Internet rudeness. There are two very confusing things said in the video and article which I think are putting people on the wrong track.

This can’t possibly be true! Nothing can move faster than the speed of light.

The camera does not record at the speed of light (slightly less than 300 000 000 meters per second, or 1 billion km/h). This confuses two common meanings of the word speed: ‘velocity’ and ‘rate’. It makes no sense to say that a camera records film frames at a particular velocity, much less the velocity of light; velocity means something is moving, and in this case nothing is moving fast at all. (Except for the light pulse itself, which of course travels at the velocity of light.)

Instead, by ‘recording speed’, it really means the camera is recording at the rate of 1 billion images per second (which is not the same thing as meters per second). There is a fundamental rule saying that no object can travel at a faster velocity than 300 million meters per second, but there is no such rule for rates.

(Although, if it were an old-fashioned film camera, the film would have to feed through the camera at a velocity faster than the speed of light, which would be impossible. So it’s lucky we live in the digital age.)

“We can see photons”

Hey, I thought you could only see light when it reflected off something into your eye! How can we see the photon moving through the bottle when it hasn’t hit anything yet?

Well, the thing we see moving through the bottle is a laser pulse – not one photon but a clump of trillions of them. Out of those trillions, some hit air molecules and fly off in all directions, and some of those happen to hit the camera. We say “the pulse scatters off the air.” So, it’s true, you can’t see photons directly unless they are flying right at you. What we’re actually watching is the air molecules lighting up as the laser pulse passes by.

None of this takes away from the fact that the front edge of that laser pulse travels with the speed of light — and we are watching that in slow motion! How cool is that?

Most people know Murphy’s Law as the cynical maxim “Anything that can go wrong, will go wrong.” A more engineering-oriented form, which some claim to be closer to Murphy’s original cry of exasperation, goes like this: “Given two or more ways of hooking something up, if one of them will result in disaster, then someone will do it that way.”

For example, the Jargon File says this about it:

…you don’t make a two-pin plug symmetrical and then label it “THIS WAY UP”; if it matters which way it is plugged in, then you make the design asymmetrical.

I bring this up because I solved an experimental problem on Friday that has been torturing me for months. I was using an aspheric lens to focus a laser beam. For people who don’t know what that is, it’s a small piece of glass with a flat side and a curved side, and it matters which way round you put it in. Take a look at the lens and the tube mount that came along with it. There is external thread on the lens holder, and internal thread on the tube mount: 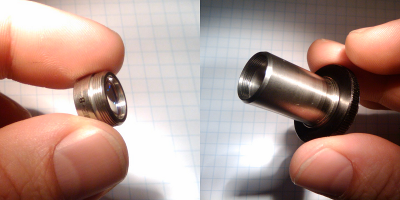 How would YOU put it together?

“Now that’s an example of good design,” I thought to myself on what must have been October 26, 2009 according to my lab journal, when I first started using the lens. “There’s only one way of screwing it into the tube, so it’s impossible to get backwards!” And I thought no more of it.

And so, between that time and now, I tried all sorts of tricks to correct the strange deviations I saw in my experiment. But for some reason, this lens occupied a mental blind spot, until last Friday, when I was talking to one of my advisors about the experiment.

He asked if I’d put the asphere in backwards, and I said, “No, that couldn’t be it — it only fits into the tube mount one way, and if I was supposed to use the tube the other way around, then the focus would be inside the tube.” But I checked anyway, and, well, what do you know.

It turns out that the correct way to mount the lens in the tube is to drop it into the unthreaded end, and then use a special tool to tighten it. 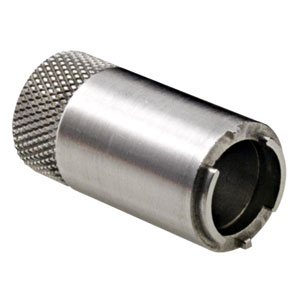 This has to be some of the dumbest engineering I’ve ever seen on the part of Thorlabs, the manufacturer. Not only are there two ways of hooking something up here, but the only obvious way is the wrong way. And the right way is not only not obvious, but even requires a special tool which is guaranteed to get borrowed and never returned or misplaced in some toolbox somewhere. And worst of all, the whole issue could easily have been avoided by putting the threads on the other end of the lens holder.

At least I got the satisfaction of solving all my problems at once by flipping over a centimeter-sized piece of glass. Shame on you, Thorlabs.

This work is licensed under a Creative Commons Attribution-ShareAlike 4.0 International License.